Greer is Home to the Largest Elk Population in Arizona 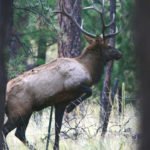 One of truly majestic creatures of the American West is the Elk. Weighing up to 700lbs, these powerful deer roam all around the mountains, presenting a wonderful sight to see. Greer, Arizona actually happens to house the largest elk population in Arizona.  Therefore, when you make your way up to the cozy mountain haven of Greer, you can certainly expect to see a few large elk hanging around some of the town’s grassy meadows.

Elk used to be widely present throughout America, but when European settlers arrived the population dwindled substantially, resulting in a threatened species. However, recent efforts have helped re-introduce elk to new habitats, where they have thrived under greater protections. 83 elk were introduced to the Greer area in 1913, and the number has since climbed to greater than 35,000, making this elk population in Arizona one of the most thriving in all of America. Set amongst the largest Ponderosa Pine forest in the world, the elk make for a beautiful and magical sight!

Of course the increased elk population does come with its challenges. There was one incident caught on the news where a herd of elk held up traffic with an epic “jaywalking spree” (watch the popular video below ⬇). While that was harmless and amusing, elk can be quite dangerous for drivers, especially at night, so we urge drivers to pay close attention to the roads and be careful. Driving slowly around marked yellow animal-crossing signs is highly advised.

During the day, however, the elk provide wonderful scenery throughout Greer, as they graze in the meadows or wander alongside the roads. It’s a wonderful place to see these animals, including other wildlife such as deer, fox, coyotes, wild turkeys, bald eagles and more! Due to Greer’s remoteness and small size, these animal populations thrive in the area and make it a perfect spot to introduce kids to wildlife and the great outdoors in general. So be sure to bring your cameras with you to Greer, as you will likely come across several of these special creatures!